The key to the RotaBed’s superior performance is a unique swirl induced Coriolis grid that achieves much greater fluidized bed stability resulting in more efficient gas mixing and transfer efficiency then less advanced designs. This unique approach to gas-liquid fluidization is accomplished without the need for marbles or plastic spheres that are prone to fouling or replacement due to wear. RotaBed’s “packless”, highly plug-resistant grid cross section is up to 99% open in the fluid contact scrubbing zone. 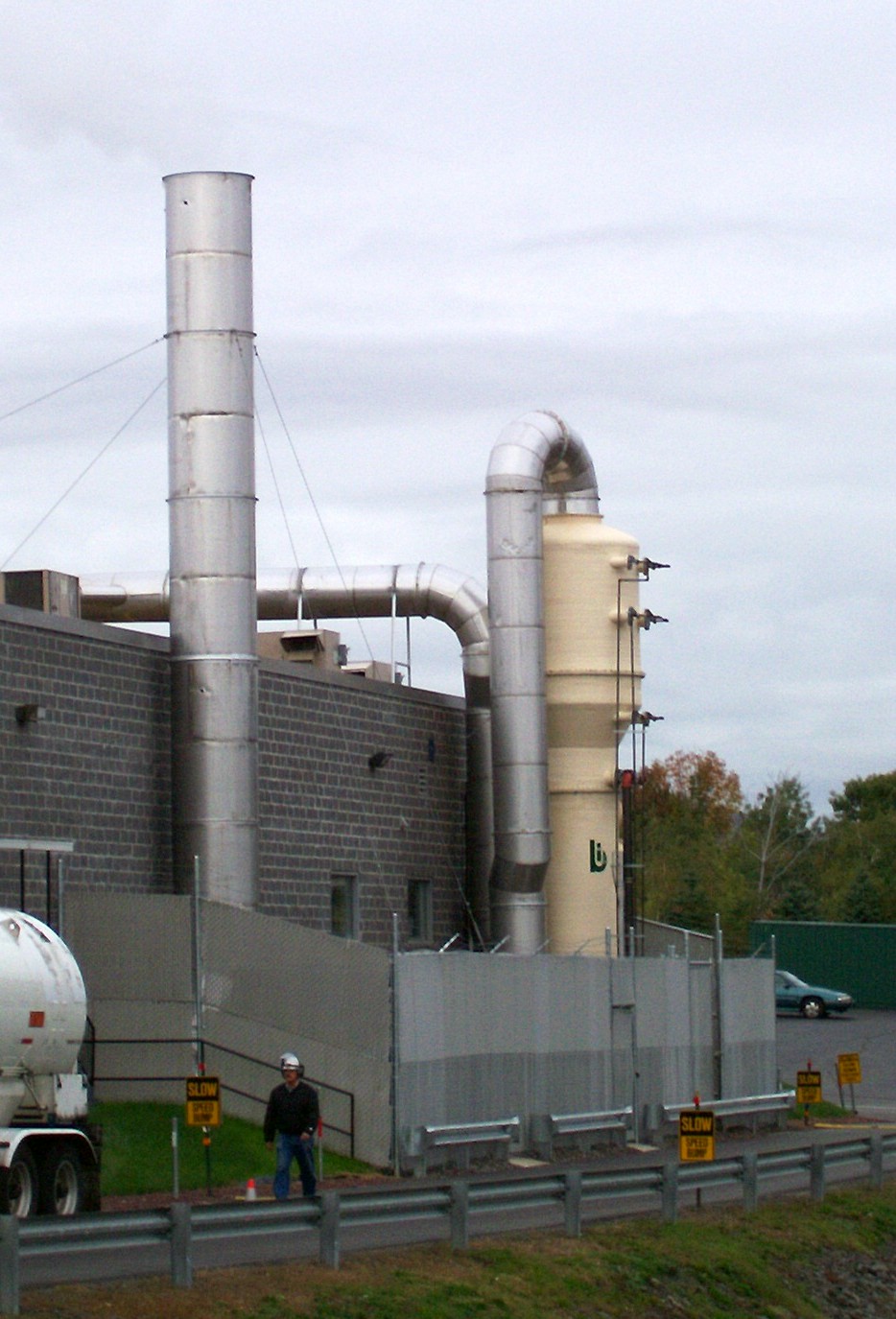 The RotaBed cleaned gas passes through a two stage droplet removal stage (8) and exits through the gas outlet (9).

The following is a list of frequently asked questions regarding Bionomic Industries’ patented RotaBed® scrubber:

What kind of scrubber is it?

The RotaBed® scrubber generically is a “fluidized” or “two phase bed” type scrubber.

The term “fluidized” is most commonly applied to two-phase mixtures of solids and gases but can be equally applied to water and gas mixtures.  Of the fluidized bed type scrubbers, there are types that froth,  “bubble” (ebulate) and only one that both fluidizes and swirls the gas/liquid contact zone, the RotaBed® scrubber.

In the broadest of terms, all of these devices work by injecting a gas stream into a liquid using some internal device designed for that purpose and having the liquid and gas compete for the same openings in that internal device.   How they do this is vastly different.

The most rudimentary type fluidized bed scrubber is the decades old design called the weeping sieve tray.  The “internal device” is usually a simple, horizontal, perforated flat plate that resembles a sieve, thus the name.   Scrubbing liquid is introduced typically from above the tray and it drains through the perforations through which the gas passes.  In doing so, a “froth” or fluidized zone is created.  Sieve trays are sometimes used on large flue gas desulfurization scrubbers as a preliminary separator, for example, ahead of chevrons.  The gas goes up through holes in a horizontal plate and the liquid drains the other way through the hole.  In general, the fluidized zone randomly bubbles across the surface of the sieve tray.  Gas velocities must be low enough to allow the liquid to drain otherwise the sieve tray will flood.  The latter can cause severe damage to the tray if allowed to occur.   Gas velocities are therefore about 10 feet/sec. vertical or less.

There are literally hundreds of sieve tray scrubbers in operation worldwide.

A variation of the sieve tray is the “rods” type tray that uses a group of horizontal, parallel, pipes or rods to produce the gas/liquid mixing zone

What is the RotaBed® scrubber and how is it different?

The latest and highest efficiency fluidized bed scrubbing device is the Coriolis effect scrubber, or RotaBed®.   The general concept was documented and explored by Mr.. Schifftner in 1985 and was subsequently developed at Bionomic Industries West Coast facility in Oceanside, CA in 1997-98.

This design abandons the parabolic velocity pressure profile of the earlier type catenary grid scrubber also developed by Mr. Schifftner.   Instead, it uses the Coriolis effect and a special swirl inducer to cause the liquid to fluidize and swirl.  A conical shaped grid of even greater open area and lower pressure drop is used.

The Coriolis effect is seen in everyday life when we watch water drain.  As the water level drops towards the drain opening, the rotation of the Earth imparts a subtle reaction force to the movement of the water causing it to swirl.  The fluidized liquid rotation in the RotaBed® scrubber causes the gas to slowly swirl as well creating a corkscrew shaped fluidized zone rather than a simple, haphazard “bubbling” one.  The slow turning of the fluidized bed helps impart the critically needed stability totally lacking in previous designs. The grid could be made in a simple conical shape rather than a complex curved one since there is no “mirror image” velocity pressure profile aspect in the design.

It was also discovered that only the vertical vector component of the streamline velocity pressure influences the net fluidized bed height (rather than the total velocity pressure as in the catenary type).  The fluidized height could therefore be reduced and the liquid-to-gas density be increased.  These combined effects make the Coriolis effect design more efficient because more liquid is brought into closer and longer contact with the gas.  Contaminant gases therefore only need to diffuse over a short distance to be absorbed.  The swirling bed is inherently more stable as well because a polar moment of inertia is developed much like the force that stabilizes a spinning top.  There is no polar moment of inertia at all in the catenary type grid scrubber because its ebulating bed doesn’t swirl.

The result is a far more stable, higher velocity, and less expensive design than the catenary type scrubber.  The RotaBed® can operate at even higher gas velocities with greater stability and higher efficiency.

How do the efficiencies compare?

In general, the RotaBed® produces a higher mass transfer per unit volume than any of the other designs.  It operates at about 30-40% higher gas velocities than the sieve tray or rods type fluidized bed scrubbers since its grid is far more open,and about 10-20% higher than the earlier catenary grid type scrubber because the ROTABED’s fluidized bed swirls at reduced height.

A single grid removal efficiency on SO2 of 97-99% was obtained using Eo filtrate.  Efficiencies of well over 99% were obtained on HCl absorption.  Higher efficiencies of over 99.9% are possible using additional grid stages.

“You have always had great response times to all my requests.”
– Jack Ashmore